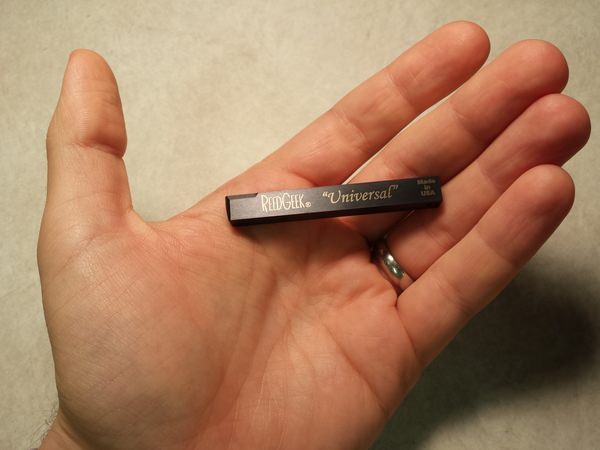 I’m a little late to the party on this, as the ReedGeek has been around for a number of years now and has been widely reviewed, but I finally picked one up (at ClarinetFest) after a long conversation/demonstration with inventor Mauro Di Gioia.  I have been using mine for a few months now and wanted to add a few points to the conversation. Here is my take.

The ReedGeek isn’t completely replacing my traditional reed tools, but, I am using it for some of the tasks that I used to do with those tools:

I’m not currently using the ReedGeek for:

The ReedGeek is very portable, won’t be confiscated at an airport security checkpoint, and doesn’t need sharpening like a knife or replacing like sandpaper. (When I spoke with Mr. Di Gioia he joked that he has to hope that people lose them so they will have to buy more.)

The ReedGeek has a hole drilled though one end (visible in the oboe reed picture), which I thought might be a way to attach some kind of handle, or perhaps to put it on a lanyard or keyring. In my follow-up call with Mr. Di Gioia, he explained that the hole has to do with the ReedGeek manufacturing process, and that keeping the ReedGeek on your keyring would likely damage your keys as it is much harder than the metals keys are made from. Also, the ReedGeek’s edges feel sharp to me, but not really in such a way that I would cut myself on them; Mr. Di Gioia recommends handling it with care but isn’t aware of people injuring themselves with it. He has an idea for a sleeve or sheath that may become available at some future date, and that could make carrying the ReedGeek in your pocket more feasible.

The verdict: for me, it’s useful and I will easily get my money’s worth out of it as long as I don’t lose it. For a single-reed player, I think it can realistically replace most or all of your tools. For a double-reed player, it’s currently a supplementary tool at best, but stay tuned for a possible new product.

At the time of this writing the ReedGeek goes for right about $50 from the ReedGeek store; some retailers also carry it.

I saw a blog post recently by a saxophonist who had been called upon to play some clarinet for a big band jazz gig. The post was full of common frustrations that saxophonists who are casual clarinet doublers face in that situation. I want to respond to some of the ideas in that post, but since it’s not my object to embarrass anyone I’m not going to name the saxophonist or link to the blog post. Also, the “quotes” I’m using here are actually paraphrases, but I believe they capture the saxophonist’s intended meaning.

The clarinet is evil! And it sounds like a dying animal.

I understand this is said in jest, but fear and/or contempt are not good starting points for approaching woodwind doubles. Either focus your energies on instruments you are motivated to play, or have an open mind. As with most things, you probably hate and fear the clarinet because you haven’t taken the time and effort to get to know it.

I’m actually pretty good at the bass clarinet, though.

I doubt it! There are plenty of saxophonists who claim they can play the bass clarinet but not the B-flat clarinet. In many, many of those cases, what the saxophonists mean is that they can use a very saxophoney approach to playing the bass clarinet—a too-low voicing, a too-horizontal mouthpiece angle, etc.—and make some kind of sound, whereas the smaller B-flat simply won’t cooperate at all with these bad techniques. Truly good bass clarinetists, however, produce a more characteristic sound because they play the instrument like what it is: a member of the clarinet family.

During a rare visit to a music store this week, I overheard a very young clarinetist asking a salesperson to help him locate some unusually stiff reeds. The salesperson was as surprised as was I that the young man was interested in such an extreme equipment choice—but apparently for different reasons.

“You must be very talented to have moved up to such stiff reeds already,” the salesperson told the beaming prodigy. “How impressive!”

To me, this is a little like congratulating someone on moving up to a larger hat size. “Oh, it’s nothing, really. I started out in a 7¼, but I worked really hard and now I’m ready for the 7½. But the real greats all wear at least an 8, so that’s where I want to end up.” Bigger isn’t better—you should wear whatever fits your head.

A clarinet or saxophone reed should be an appropriate fit to the mouthpiece. There are a number of factors that determine what strength of reed is right for a mouthpiece, but, in general terms, most mouthpieces with wider tip openings require softer reeds to get good response, and most mouthpieces with narrower openings need a stiffer reed for stability and dynamic range.

While each player is of course different, I think sometimes the factor of the individual embouchure is actually over-emphasized. The embouchure doesn’t and shouldn’t need unusual muscular strength to do its job—it requires delicacy and control. If you’re biting and straining against a too-stiff reed, you’re sacrificing both, and both you and your audience are suffering for it. For most mouthpieces, there is a narrow range of reed strengths that is about right, no matter how “strong” you are (or think you are).

There’s no such thing as “moving up” to a stiffer reed, just “moving” to a different strength to suit a new mouthpiece or to correct an error in your previous reed choice. 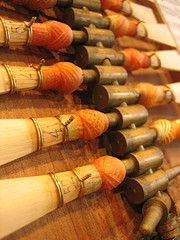 There are three things to consider when evaluating a reed. I consider these same factors for either single or double reeds, and prioritize them in this order. 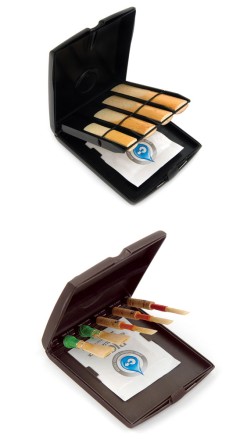 Detailed review follows, but here is the quick summary:

Current street price on both the single reed case and the double reed case  seems to be about $20. This includes one Reed Vitalizer pack. If you choose to use the Reed Vitalizer packs on an ongoing basis, they go for about $5 apiece, and Rico says you will need a new one every 45-60 days (so, up to around $40/year, not counting tax or shipping). 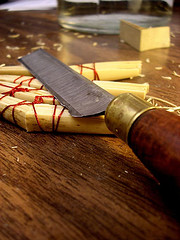 I worked on reeds today (both single and double). My favorite reed tip: don’t adjust your best one. Adjust some others until one of them is the best, and then go back and work on the first one if you like.

Adjusting reeds can be a little risky, so gamble on a reed that you won’t miss too much if it doesn’t survive. And don’t put all your eggs in one basket, concentrating all your efforts trying to perfect one reed—try to bring several up to a playable level.

Rico seems to be continuing their push to get their reeds into players’ cases for an audition. I wrote a couple of years ago about their “Make the Switch” promotion, in which I scored some free Rico Jazz Select tenor reeds.

With their current promotion, through the Woodwind and the Brasswind, you order a box of your favorite non-Rico clarinet or alto saxophone reeds, and get a free box of the comparable Rico offering. The deal is good through March 7 or while supplies last, so I suggest putting in your monthly (weekly?) reed order today and scoring a free box.

I’m more than happy to try out some new reeds for free, and won’t hesitate to switch if I find them better than what I’m currently using. (*wink*)

I am pleased to announce that, after several weeks of exciting and productive talks, I have signed on for an endorsement and development deal with an up-and-coming reed manufacturer. Here’s the official press release:

FORT WAYNE, Indiana.—FLAVOREEDS™ Flavored Clarinet and Saxophone Reeds, Inc., is pleased to announce the first in what it hopes will be a series of “fruit”ful relationships with professional woodwind players in developing and promoting its new professional line of premium cane instrument reeds.

The first FLAVOREEDS™ Artist to join the roster is multiple woodwind performer and educator Bret Pimentel. Dr. Pimentel has performed with such acts as Dave Brubeck, the Mormon Tabernacle Choir, and the O’Jays, and is currently Assistant Professor of Music at Delta State University. He is an experienced performer on all the major woodwind instruments, and expects to bring this expertise to bear in consulting on new and current product lines.

“As soon as I made a verbal commitment to the company, I forwarded them some thoughts about their new Papaya-Mango Bass Saxophone Reeds™,” Pimentel said in a telephone interview. “I found them to be a little overpowering in the papaya department, with not enough mango. I’m working closely with FLAVOREEDS™ to better balance the flavors.”

A few months ago, I posted about plastic reeds, and reported some of what I had read on another woodwind blog about the Légère Signature Series and Forestone clarinet reeds.

For reasons unknown to me, the post from which I originally quoted has been removed, but there are similar thoughts expressed in a more recent post.

Anyway, I got a kind offer from someone at Légère to send me a few samples.* They asked about my current cane reed preference, and sent three reeds in different strengths close to what I currently use.

I’ve posted a few times over the past year about making double reeds (cf. here, here, and here), and I maintain that this is the truest way to abiding oboe/bassoon satisfaction. If you consider those instruments to be serious parts of what you do as a musician, you need to learn to make—or at least skillfully adjust—reeds.

But, frankly, not everyone is up to the challenge.

The basic reedmaking process can be learned within a few lessons, but developing the skills well enough to make good reeds consistently can take years, and most reedmakers will continue to develop and modify their approach over a lifetime.

Reedmaking is expensive, too. A set of the most basic tools for making reeds from preprocessed (gouged, shaped, and, for bassoon, profiled) cane costs as much as several boxes of clarinet or saxophone reeds, and the cane doesn’t come cheap, either. If you want the control of doing your own gouging, shaping, and so forth, the additional equipment may cost you nearly as much as a pro-line clarinet.

And, of course, reedmaking takes time. I’ve heard the “rule of thumb” that an oboist, for example, should spend an hour making reeds for every hour he or she spends practicing. I don’t know that I agree entirely, but you get the idea of what kind of commitment is involved.

So, if I’ve now talked you out of making your own reeds, what are your options?