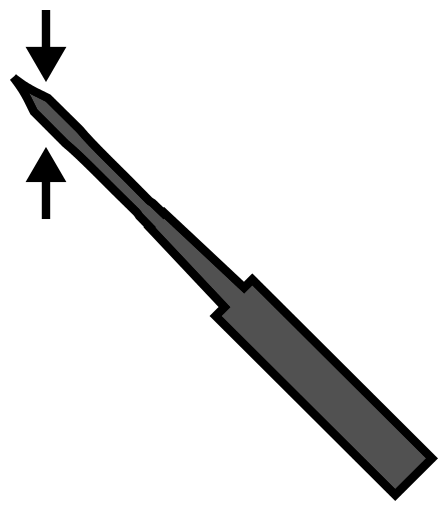 Oboists trained in the “American school” of oboe playing, like myself, tend to hold the instrument at around a 45° angle from the body. Oboists in many other parts of the world hold the instrument at a higher angle, a few degrees closer to horizontal. This is one factor (of several) that accounts for the difference in tone between American oboists (often described as having a “darker” sound) and, say, some European oboists (having a “brighter” sound).

The reason the angle is important is because it affects the embouchure. Holding the oboe in a genuinely horizontal position situates the lips on the reed’s blades in an even way:

This allows the reed to vibrate in a balanced, efficient way, with lots of vibrance and color. But holding the instrument at an angle makes the lips contact the blades of the reed in an uneven way:

Note that the upper lip is nearer the reed’s tip, and the lower lip is a few millimeters nearer the thread. This uneven contact reduces the reed’s efficiency, muting some of the overtones for a sound that is less colorful but also less strident—in other words, characteristic of the American oboe sound.

A bassoon’s bocal brings the reed to the bassoonist’s mouth at a nearly horizontal angle, and a poorly-formed embouchure will create roughly equal contact with the upper and lower lips, causing a buzzy sound. But the bassoonist’s “overbite” technique makes the contact uneven, darkening and containing the sound (as well as improving response). This is actually upside down compared to the oboe, since the lower lip is nearer the reed’s tip and the upper lip is nearer the first wire.

Well-formed oboe and bassoon embouchures require attention to angle and overbite (respectively) to produce the best sounds with the least effort.

1 thought on “The double reeds and “uneven” embouchures”