If you’re not familiar with the Larry Krantz Flute Pages, you need to surf right on over and spend a few hours. Mr. Krantz has been building a major hub for web-connected flutists since back before many of us knew about the Internet. His site is a positively huge repository of flute-related wisdom, including contributed content by the likes of Trevor Wye, John Wion, and Robert Dick.

Mr. Krantz was a doubler in years past, apparently quite accomplished on flute, clarinet, and saxophone, and at least a dabbler in oboe. Nearly twenty years ago, however, he decided to give up doubling to focus on his flute playing.

Mr. Krantz discusses his decision at some length here, in excerpts from discussions on the FLUTE mailing list. While he speaks fondly of his years as a doubler, and points out many of the benefits of doubling, his ultimate conclusion was that doubling was not for him. The primary reason he gives for this decision is that, in his admittedly well-qualified opinion, it simply isn’t possible to maintain a truly fine embouchure on multiple instruments.

Some, but fortunately not all, of these are mistakes I have made myself.

Another question that I am frequently asked as a woodwind doubler is, “Which instrument is your favorite?”

My answer to this is simple.

If it’s a good day, then my favorite is the one I’m playing.

If it’s a bad day, then my favorite is any one but the one I’m playing.

In response to my recent post about woodwind doubling degree programs, someone sent me this question:

My question is, out of that list, do you know of which schools offer multiple woodwinds with a Jazz/Contemporary focus … or at least some focus on jazz?

I checked out most of those pages, but it seems it’s all very classical focused.

Before addressing that question, I think it’s worth saying that if you’re going to be a woodwind doubler, a little jazz background is really valuable.

I’ve updated my list of schools with woodwind doubling programs. The current count as of this writing is 5 schools with some kind of bachelor’s degree program, 15 with a master’s program, and 5 with a doctoral program. 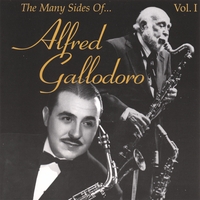 I recently picked up a copy of The Many Sides of Alfred Gallodoro, Vol. I from Half.com. (As of this writing, they don’t have any copies left, so you’ll either have to get yours from his own website or from CD Baby. There are sound clips at both sites.)

Mr. Gallodoro is a living legend of woodwind playing: born in 1913, started playing professionally as a teenager, and is still at it. I’ve got him listed on my little woodwind doublers’ hall of fame, and you can read his full official bio here.

Another national search for a full-time professor of multiple woodwinds has been announced. This makes the third one in a week’s time!

I’ve been practicing the Telemann recorder suite this summer, and I had been meaning to write a recorder-related post. I thought I might mention this video of Masato Honda, a Japanese woodwind doubler and fusion/smooth jazz artist, but Gandalfe at The Bis Key Chronicles beat me to the punch today with this post featuring another video, of Mr. Honda’s really nice saxophone playing.

In my last post, I listed some alternate titles for “woodwind doubler.” Here are my thoughts on some of them.