My doctoral dissertation is now available online through the University of Georgia library:

Woodwind doubling on folk, ethnic, and period instruments in film and theater music: Case studies and a practical manual

It was completed in 2009 so some things are already out of date. Also, lately I’m trying to steer away from the term “ethnic” instruments (“world” instruments seems slightly less problematic until I can find a better solution).

Woodwind doubling is the practice of playing instruments from more than one woodwind family. In musical theater and film music, woodwind doublers are valuable for their ability to produce the sounds of a varied woodwind section for a fraction of the cost of hiring a specialist musician to play each instrument.

Since the 1990’s, composers and orchestrators in musical theater and film scoring have shown increased interest in instrumental sounds from outside the traditional symphony orchestra. Many have featured folk, ethnic, or period instruments as solo instruments, bringing authentic sounds to scenes set in faraway locations or historical periods, giving an exotic flair to fictional locales, or simply adding new colors to the usual palette of instrumental sounds.

Composers of film and theater scores have used ethnic woodwinds, in particular, in their scoring. To meet the demand for ethnic woodwind sounds, many prominent woodwind doublers on Broadway and in Hollywood have adopted these instruments, in addition to their usual arrays of modern Western instruments.

Eight folk, ethnic, and period woodwinds recently employed in film and theater scoring have been selected for study in this document: bamboo flutes (especially the Indian bansuri and flutes used by some flutists in Irish traditional music), the Chinese dizi, the Armenian duduk, the Native American flute, the panflutes of Romania and South America, the pennywhistle, the recorder, and the Japanese shakuhachi.

For each instrument, a representative example of use in theater or film music has been selected and transcribed from a commercial audio recording. Each transcription is discussed with emphasis on demands placed upon the ethnic woodwind musician. Additional discussion of each instrument includes suggestions for purchasing instruments, fingering charts, description of playing technique, description of instrument-specific performance practices, discussion of various sizes and/or keys of each instrument, discussion of instrument-specific notation practices, annotated bibliographies of available pedagogical materials, lists of representative recordings (including authentic ethnic music and other music), and information on relevant organizations and associations of professional or amateur musicians.

Read the full text at the UGA library website

If you are nerdy/awesome enough to be into (1) the pedagogy of Irish traditional woodwind playing and (2) open-source text-based music notation software, then you may want to check out my set of symbols for Lilypond, based on the excellent ornamentation system by Grey Larsen. You can get the .ily file on GitHub (and submit your pull requests to make improvements to my code).

If you are unfamiliar with Mr. Larsen’s system and you play pennywhistles or wooden flutes, then really I must insist that you buy a copy of his The Essential Guide to Irish Flute and Tin Whistle immediately—his ornamentation system is clear and logical and should be regarded as the standard for teaching and learning Irish-traditional ornamentation for wind instruments.

If you are unfamiliar with Lilypond, chances are good that you won’t like it even though it’s free and produces much better notation than the software you already spent several hundred dollars on.

Also, it’s worth noting that Chris Throup already had a similar idea a few years ago. Mine is a bit more complete, but his is really simple.

Bamboo flutes and other “world”-type woodwinds of true musician quality can be difficult to find, and if you’re not experienced with them it can be nearly impossible to tell if an online seller’s wares are genuinely playable or more like souvenir items. I’m going to share an experience of mine in which I gambled and got burned, in case it is instructive to anyone out there.

Recently I needed a bamboo flute in a specific and unusual key (high B-flat) on very short notice for a gig (a performance of the Duke Ellington Nutcracker Suite). My favorite trusted flutemakers don’t currently make flutes in that key, so I placed an order with a flutemaker that I hadn’t bought from before. (I won’t identify the flutemaker here, but I will say that he and his staff were very nice to me. When there was a totally-understandable wrinkle in getting the flute shipped on time, they even overnighted it plus threw in a very nice flute bag at no extra charge.)

Ability to ship quickly was certainly a factor in my choice of vendors, but I was also reassured by the fact that the maker sells flutes in three grades: student, intermediate, and professional. I ponied up the money for a professional flute, and expressed to the flutemaker my need for excellent intonation and a strong high register.

Here is what I received:

Now, the proof of a flute is in the playing, and there’s no way to know for sure if it’s any good without giving it a try. But here are some immediate visual warning signs:

When I realized that the flute wasn’t going to be usable, I packed my piccolo and a B-flat pennywhistle as possible alternatives. As it turned out, we didn’t end up playing the movement in question, so I was off the hook.

I recently got email from a reader about the use of Chinese woodwinds in theater and film music. I did my best to answer his questions, and I’m posting them here in case they are of use to anyone else. Both questions and answers are edited here for length and awesomeness.

My question for you is about bamboo flutes. I see the term bamboo flute thrown around (such as in the reed 1 book for Aida) and I wonder what exactly that means. Do those musicians own 12 bamboo sticks with holes drilled in them, or do they use a specific style of bamboo flute from a particular part of the world?

If the part calls for “bamboo flute” with no other clarification, I think that leaves it pretty well open to interpretation by the flutist and musical director. Aida is set in the Old Kingdom of Egypt, where, according to my Wikipedia research, bamboo per se did not grow. Probably the best-known bamboo-ish Egyptian flutes are neys, made from bamboo-like reeds.

My guess is that most woodwind players would substitute some variety of bamboo transverse flute, such as an Indian bansuri, a Chinese dizi (perhaps with the buzzing membrane replaced by a piece of tape), or a non-culture-specific bamboo flute like those sold by Erik the Flutemaker. Doug Tipple’s PVC flutes make an excellent and economical substitute for bamboo, with nice tone (I dare you to hear the difference) and consistent intonation and response. You might be able to contact musicians who have worked on specific shows, and find out what solutions they came up with; the Internet Broadway Database is a good starting point.

Your listing for The Lion King is much more specific, which brings me to my next question: dizi keys. I happen to be in China right now. Tunable dizi flutes are cheap, and one-piece dizi are cheaper. Do I need 12 tunable dizi? What keys are actually played in theater and film in the US? 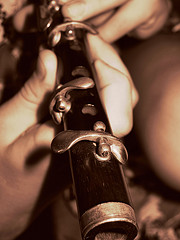 I’ve got ethnic woodwinds on the brain lately, and no end in sight since they are the topic of my doctoral dissertation research. If you haven’t added any ethnic instruments to your arsenal yet, here’s what I recommend for a relatively easy to play, low-maintenance, inexpensive, and versatile beginning to your collection.