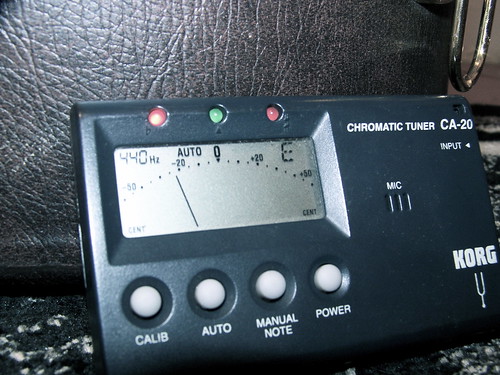 Over 20 years ago, I was a brand-new music performance major. This is a story about that first year of college that I’ve told many times to my own college students.

I arrived at college with the confidence granted me by a freshly-minted high school diploma and a track record of first-chair saxophone school band placements. I eagerly auditioned for the university concert bands and jazz bands, and was gutted to find myself placed not only in the lowest groups (the #3 band in both cases), but doubling up parts with other players. Devastatingly, a fellow freshman saxophonist landed spots in both the #1 groups.

It was one of the best things that could have happened to me. I hit the practice rooms hard, gradually worked my way up, and in my senior year finally got spots in both top bands. By that time I had gotten serious about woodwind doubling, and earned a fun and important spot in the top concert band outside the saxophone section. And I got the lead alto chair in the top jazz band (and couldn’t help but enjoy a little that the classmate I had envied so much was sitting second).

Had I gotten the seats I wanted right away, maybe I would have coasted through college. And it’s possible I never would have developed an interest woodwind doubling, which now is central to the career that I enjoy so much. Looking back now, having those particular chairs in those particular semesters seems very unimportant, but my growth during those years laid the groundwork for two graduate degrees and a life in playing and teaching music.

Whatever your current stage in your musical development, there are bigger and better things to come. How you measure up to others matters much less than what you’re doing to get to your own next level.