The Colorado Symphony Orchestra, like so many others, is facing a financial crisis that threatens its ability to continue making music. An opinion piece in Sunday’s Denver Post criticizes the Denver Musicians’ Association (AFM Local 20-623) for its unwillingness to budge on certain elements of its agreement with the orchestra.

The issues here are complex, and I hope that the DMA and the CSO will be able to come to a solution that is fair to all involved and that keeps the music alive. But this point in the authors’ list of complaints caught my eye:

Musicians performing on more than one instrument receive “doubling pay.”

I don’t have the full details of the doubling pay currently available to CSO members (though the amount doesn’t appear to be the issue here—it’s the fact that any doubling pay is offered that seems to offend). But a slightly-outdated agreement between the DMA and the Boulder Philharmonic, summarized below, shows a typical doubling pay structure, and it’s a reasonable guess that the CSO’s is identical or very similar:

Though I am not currently a union member (due to a dearth of union gigs in my area), I frequently ask for doubling fees when negotiating my pay for gigs. Here’s why doubling fees make sense to me as a woodwind player: 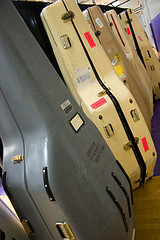 The AFM is calling for “all musicians” to sign a petition in support of including the relevant text from the Senate version in the final version of the bill. You can sign the petition at the AFM’s website.