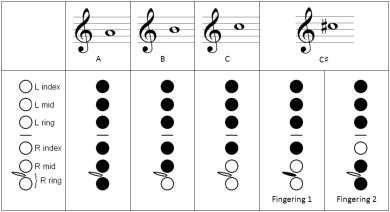 Here are my answers:

My students did pretty well on the first four questions, using what they have learned from lectures and hands-on experience over the course of the semester. But the last question didn’t go as well.

I expected the question to make my students squirm a little bit. And, granted, there isn’t nearly enough information provided to give a 100% sure answer. Because of this, I ended up grading the question generously, and I may consider striking it altogether from future exams. But I had hoped that they would put the following things together:

This puzzled me at first, and I’ll confess I even flirted with the notion that one student had put this answer down as a wild guess and the others had cheated. But on further reflection I decided that my students are honest but were probably thinking of something more like this:

This, in my estimation, would produce a B-flat. I think my students saw the half-hole as likely to raise the pitch of the note by a half-step; to me, the likely error there is that that particular half-hole was positioned to serve better as a vent than as a tonehole. And even that kind of simple woodwind acoustics is really beyond the scope of a one-semester crash woodwinds course.