I’ve been using Facebook this school year to semi-publicly acknowledge my university students who are meeting their minimum practice requirements: 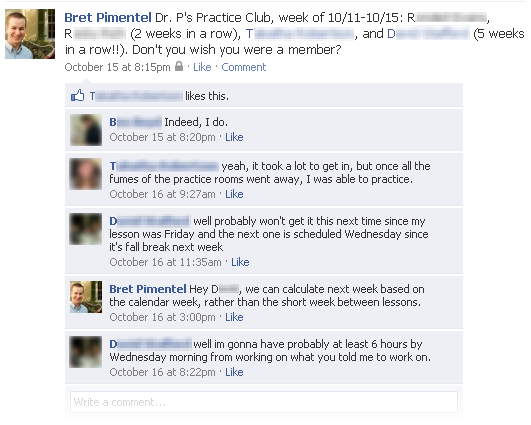 I’ve gotten a lot of questions about it from Facebook friends who are music educators, so I thought it might be worth discussing here.

The concept is pretty simple:

A little commentary on the screenshot:

The question I’m getting from fellow educators, of course, is: Is it working?

The answer, of course, is: Maybe.

I think some of my students crave the public-ish attention, whether from me or from others who might notice what they are accomplishing. And doing this requires almost no effort on my part—if I can encourage students to practice by taking two minutes a week to put their names into my Facebook status, then it’s well worthwhile. Naturally, there are others among my students who resist any effort I make to get them into the practice rooms, and a Facebook mention isn’t going to change their attitudes. And I still believe that the students who will have the greatest success are the ones who self-motivate.

All in all, I think this has been a good tool for developing a sense among my students that the ones who consistently meet expectations are part of a select group, and certainly when I have special opportunities or honors that I can give to students, I probably won’t need to look farther than my Practice Club.

I would be interested to know what ways you are using social media, etc. in your teaching, and what you’re doing to get your students practicing (especially if consistent, sustained practice is a new concept for them). Leave me a comment below!