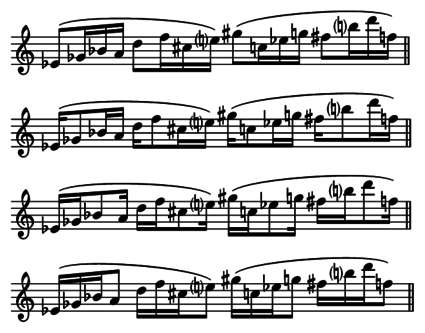 A popular article from the Bulletproof Musician blog has been making the rounds on social media again, which, to oversimplify, recommends variety in your practice routine.

What is crucial is that you are keeping your brain engaged by varying the material.

One of the suggestions the author (clarinetist Christine Carter) makes is to practice passages “in different rhythmic variations.” She doesn’t go into detail because that isn’t the main thrust of the article, but here are some of my favorite ways of varying rhythms for practice.

The most obvious and common rhythmic variation for practice is to use uneven rhythms, alternating long and short notes. There are two ways to do it:

In all of these examples, note durations aren’t necessarily set in stone—they are just meant to show which are the long notes and which are the short ones. The first example above could alternatively be notated this way:

Those examples use groupings of two notes, a long one and a short one. We can extrapolate that to, say, groups of three notes, one long and two short. There are three ways to do that:

Another variation would be groupings of four notes, done four different ways:

For additional practice, try groups of five, six, and so on.

Another extension of this technique is to keep the basic rhythm the same but shift it within the meter:

Use subtle anchoring to make this especially effective. Again, the possible variations are limited only by your imagination: try playing the passage in triplets instead of sixteenths, and then shift those within the meter.

I find these techniques to be an excellent way to keep some variety and interest in my practicing even when I’m stuck on a particularly frustrating passage. The Bulletproof Musician article suggests rotating between several passages in order to keep the routine varied, and I agree that is a useful way to practice, but I find that, in moderate doses, playing one passage in many different ways has similar effects.

Keep your practicing varied and goal-oriented!