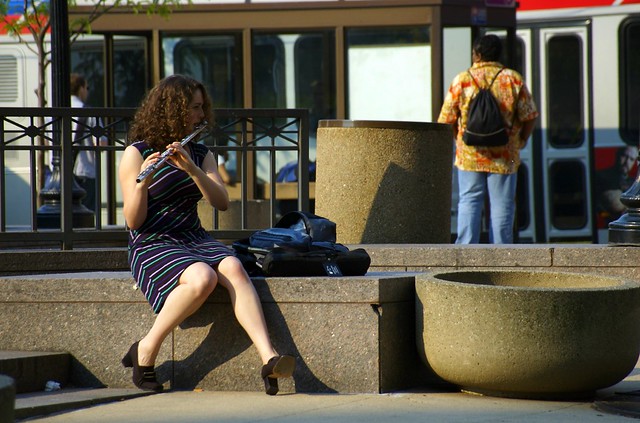 “Registers” are a tricky concept in woodwind playing. Here’s how they work.

For simplicity’s sake, let’s say I am playing a flute with a C footjoint. If I finger a low C, that closes all the instrument’s toneholes and produces a C4:

I can play higher notes using the same fingerings I used for lower ones because I have moved into a higher register, which in this case is an octave above the lower register. On flute, I do this by changing something about my tone production; on reed instruments I get extra help from octave/register/”whisper” keys.

So, for typical flute playing situations, we can consider the second register to begin at D5, and the third to begin at D6.

But this doesn’t paint a complete picture in terms of the instrument’s acoustical properties. When the fingerings “start over” at D5, that’s not really starting over—I have left out the low C and C-sharp fingerings. And it turns out I can in fact play C5 and C-sharp 5 using those fingerings. The reason that flutists typically don’t is that the “standard” fingerings (with most of the toneholes opened) happen to work better for most situations, with regard to pitch, tone, and/or response. Likewise, when I reach C-sharp 5 and C-sharp 6, I haven’t completely run out of toneholes to open. If I open everything I have left (both trill keys, plus maybe the G-sharp key) I can get up to about D-sharp in either octave. But I usually don’t do that unless I have a special reason, because the standard fingerings are more usable.

The flute and most of the reed instruments follow the same pattern of registers: the second register is an octave above the first, and the third is a fifth above that. Additional registers above those are also used sometimes, spaced with increasingly small intervals. This series of intervals is a naturally-occurring phenomenon known as the harmonic series.

The clarinet is an exception; due to its acoustical characteristics it uses only every other harmonic. This is why the clarinet doesn’t have an “octave” key, it has a “register” key that skips the octave register and goes straight to an octave plus a fifth.

Understanding registers is helpful in navigating between them and in finding alternate fingerings for special situations. Happy practicing!