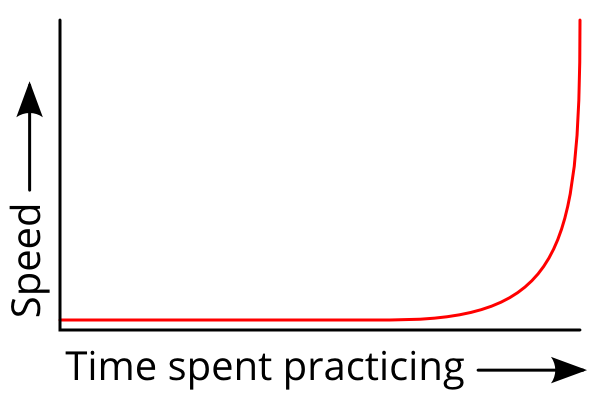 I can’t tell you how often I have had this happen in lessons, especially with my younger students:

Me: Play your E-flat major scale.

Me: Wait. Please slow down and play accurately.

Student: [Begins again at same speed as before, makes a different mistake, stops.]

Me: Okay, let me show you what I mean. [Demonstrates.]

Younger or less-experienced students in particular seem to get fixated on a perceived need to play everything as fast as possible, and often seem to prefer fast-with-mistakes over slower and more accurate. But as more experienced practice-ers know, time spent practicing this way is virtually 100% wasted.

Mastery of a technical sequence, such as playing a scale or musical passage, requires repetition. If my scale turns out differently every time because I’m playing too fast and sacrificing consistency, then I really haven’t done any repetitions. Or if I’m making the same mistake repeatedly because I’m not giving myself time to think while I play, then I’m doing repetitions of something that I didn’t want to master: an incorrect version of the passage. I spent many of my younger years throwing away practice time doing each of those things.

It’s also a mistake to move on too quickly from playing slowly. Sometimes I will see a student make several hasty, sloppy attempts at a passage, then relent and play it slowly, and then, having “succeeded,” immediately return to playing too fast. Once isn’t nearly enough. It may take several, or dozens, or hundreds, or more accurate, controlled repetitions before it’s possible to play the passage at the desired speed. But if I have laid this foundation well, I find that speed is the least of my worries—I have all the speed I need, and with solid accuracy.

And the speeding-up part of the process often takes place very late in my preparations. I think sometimes my students expect their speed to increase like this: But I get much better results if I allow this to happen: I spend more and more of my time polishing every detail of a passage at a slow tempo, and let the speeding up happen later and later. When I do this, I learn technical sequences much more thoroughly and much more efficiently (in other words, the “Time spent practicing” for a particular passage gets shorter and produces better results).

Don’t waste time and effort practicing mistakes. Be patient, slow down, play it with accuracy and control.

2 thoughts on “Slowing down”