I mentioned in my recent review of the new Rico Reserve clarinet mouthpieces that Robert Polan, Rico Product Manager, was shipping me a few additional samples for comparison. I received three X5 mouthpieces this week, and I have been inspecting and playing them side-by-side with each other and with the one X5 from the original shipment. 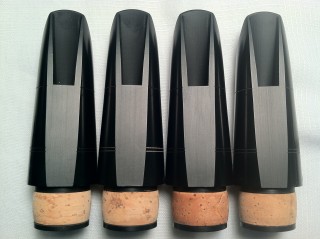 As far as visual inspection, I think the best thing I can do is show you a photo of the tables. You can click for the high-resolution version (warning: it is large and may download slowly). Check out the tips and rails especially.

I’m certain that I have never seen a mouthpiece in this price class with this level of consistency. With the mouthpieces I’m accustomed to using, I would expect at least two out of four to have immediately-obvious asymmetry in the tips, and at least two to have rails of obviously different widths. The Reserves are visually much, much more symmetrical and even. If you look very closely at the high-resolution image of the Reserves, you can probably pick out a few imperfections—but it does require looking very closely. My sense is that Rico’s claims about precision and consistency are justified, at least so far as is relevant for relatively inexpensive mass-produced mouthpieces.

Do they play identically to each other? Not 100%, but probably at least 95%. Of the four, there are two that I find to be virtually interchangeable in terms of tone, and a third that feels just barely purer in tone (or less rich, if you prefer). The fourth feels like it has a slight brightness (or presence or “sparkle,” if you like) that sets it slightly apart from the others, but only slightly. I say that these mouthpieces “feel” purer or whatever because I wasn’t able to capture the differences convincingly on a recording, and I suspect that beyond the clarinetist’s personal space even another clarinetist would be hard-pressed to tell one mouthpiece from another. (I do think the differences might cause the clarinetist to play a little differently, and that might be audible.) And the differences between the mouthpieces are, to me, less noticeable than, say, the difference between my two best performance reeds.

Response (more important than tone in mouthpiece selection) is all but indistinguishable between all four mouthpieces. I could easily keep all four in my case, pull one out blindfolded, and perform on it without any worries about response or control. Any one of these four (six, really, counting the X0 and X10 from the original review) is at least as good as, and perhaps better than, the best cherry-picked examples of other mouthpieces in the same price class.

I can also use reeds interchangeably between all four mouthpieces without any issues. I usually recommend using different reeds for different mouthpieces (even of the same model), as the reeds tend to take on a slight imprint of the mouthpiece’s window, which can cause leakiness if the reed is used on a mouthpiece with a window of even slightly different dimensions. No significant concerns about that here.

My conclusion about these mouthpieces is that some clarinetists may find (as I did) that the Reserve is a better mouthpiece than others in its class; allowing for differences in taste, some may legitimately prefer to stick with what they’ve got. But the killer feature of the Reserve mouthpiece is its replaceability. With the Reserve series, I can get a fine mouthpiece without having to sift through a pile of them to find “the one.” If I break it, I can essentially grab the next one to roll off the production line and expect it to be very, very similar. I can recommend it to my students knowing that theirs will play like mine does. Those factors, to me, are what make these mouthpieces a really exciting development.