I was pleased to hear from woodwind player and composer Gene Kaplan, who sent me a copy of his new duets books, Duos for Doublers. These, as far as I know, are a one-of-a-kind set of duets for two woodwind doublers, with the first part including flute, clarinet, and alto saxophone, and the second part including flute, clarinet, and tenor saxophone. The instruments are used in various combinations, with each player playing at least two instruments on each duet (with one exception, where the second part is tenor-only on one of the duets). 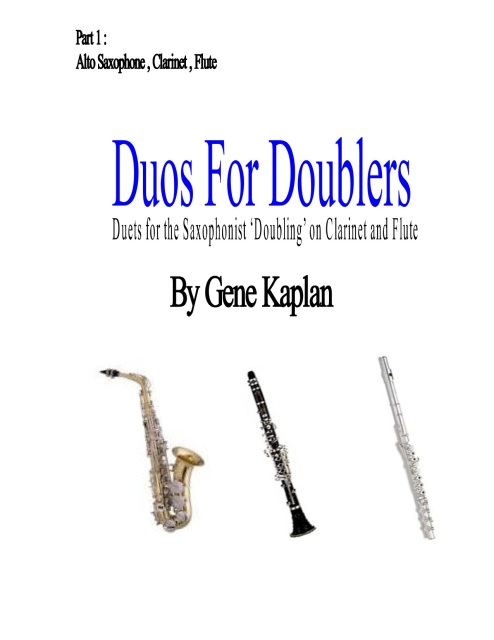 The style and the difficulty level of the duets varies. They are probably not suitable for those just starting out on their doubles (yet), as they do not shy away from bugaboos like the flute’s third octave, the clarinet break, and the saxophone’s below-the-staff notes.

I think a real benefit of these is that they do require quick instrument switches in real time and without losing your place (something that’s much easier to “fudge” with, say, solo etudes), in the company of someone who presumably will be understanding if you need to back up and try again. These duets would be great for getting together with another woodwind doubler for a little friendly challenge.

I’m on record as saying that saxophone-flute-clarinet-“only” doubling is a somewhat dated approach, and that modern doublers need to take the double reeds seriously, as well as auxiliary instruments in each woodwind family, plus probably some “world” woodwinds. These duets are still useful for working one commonly-used subset of those skills. (Gene is a double reed player himself, and acknowledges that he didn’t include them here in order to make these duets playable for more woodwind doublers.)

The set costs $30 at the time of this review (shipped free in the continental US). They are self-published, with paper covers and a clear plastic sheet over the front. The plastic comb binding is exactly what is needed for a book of sheet music to lay flat and stay open (something that some large sheet music publishers get wrong).

There are a couple of issues with layout that make these a little bit of a hassle to play, but which also probably provide just the kind of training that aspiring woodwind doublers need for real-life gig situations. The first is (some) impractical page turns, sometimes in places where the only option is to photocopy a page or to drop out for a couple of bars. Some happen during short rests, and some of those also coincide with an instrument change. The second issue is that each of the books includes only one part. My preference for duet playing is one book with both parts on the page, score-style. (This can also potentially mitigate the page turn problem, if you have four hands available instead of two.)

Here’s a quick video demo of “Acapulco Nights” by me and my less-handsome twin brother.

I’ve added these to my list of compositions for multiple-woodwind instrumentalists. Let me know if there’s anything else on your radar that should be included.