Recently, I’ve noticed a lot of jazz musician bloggers opining about the evils of memorizing patterns and “licks,” and calling for original and creative improvisation. While I don’t think anybody will argue about the importance of individuality and creativity, I do think it’s a big mistake to ignore the value of memorizing, practicing, and internalizing established jazz vocabulary.

When a person learns a foreign language, they learn first to repeat some standard useful phrases. Then they learn to rearrange the vocabulary and syntax of those phrases to create new ones. Over a lifetime of study and practice, they may learn the language well enough to speak or write with their own distinctive creative voice. But if a student tries on the first day of French class to be creative and original, they aren’t likely to make much sense. To speak the language, you need to hear it, imitate it, and then repeat over and over. Genuine individual originality comes much, much later.

So I was pleased to read an excellent blog post by saxophonist Bob Hartig:

Now, if that’s all you aspire to, then that’s where you’ll end up: as a Kenny Garrett clone. But if you desire to forge your own voice, then Kenny will simply become a part of your vocabulary, a vocabulary that includes other influences besides Kenny and increasingly reflects your personal explorations with melody, harmony, timbre, and nuance. You are an individual, after all, and the sheer force of your individuality will direct you toward your own sound and approach.

Bob expands on this in the comments section:

A good writer doesn’t become one by attempting to create a different dictionary. He or she develops expertise by becoming conversant with the existing language, and that happens largely through reading the works of great writers who have gone before. Through careful scrutiny and application of how others have handled the English language, the individual’s personal writing style emerges.

Shakespeare is noted for adding a huge number of words and phrases to the English language—undoubtedly one of the most creative minds working in that medium. But how many of the words and phrases in his works were really brand new inventions? Surely less than 1%. And how much did Charlie Parker or John Coltrane add to the jazz language, that wasn’t already there? Their contributions are staggeringly significant, but what they actually created out of thin air was a drop in the bucket among all the notes they played in their careers. For most of us mortals, our truly original contributions to the language (be it English or jazz) are few and far between; most of our creativity happens when we shuffle and remix the materials that are already before us. 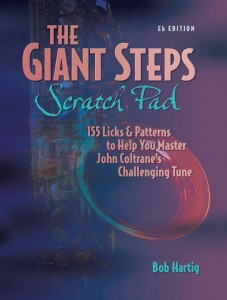 Bob backs up  his ideas about the importance of jazz vocabulary with his Giant Steps Scratch Pad project. The Scratch Pad provides a wealth of tasty and useful vocabulary for playing over the chord changes to John Coltrane’s tune “Giant Steps,” a tune that has challenged the best of jazz players for decades because of its unusual and elegantly symmetrical chord progression. Bob was kind enough to send me a review copy of the Giant Steps Scratch Pad Complete, a new PDF-only (at least for now) edition that contains the same material as the Scratch Pad, transposed into all twelve keys. The transposed material makes this especially good for those who aspire to play Giant Steps in all twelve keys, or who double on instruments of different transpositions.

I took the Scratch Pad Complete for a test drive today. For each of twelve keys, Bob provides a series of 4-bar licks or patterns which can be used effectively over the first four bars of Giant Steps. The next four bars of the tune repeat the same progression transposed, so the same set of licks can be used if desired, just in a different key. For each key Bob also gives a series of 8-bar licks that can be used over the tune’s second half. The material is varied—some is slower and more analytical, tracing the chord progression’s voice leading, but much of the material is virtuosic and beboppish. Bob also provides, under separate headings, Giant Steps vocabulary based on the augmented scale, a colorful and inspiring approach to these difficult chord changes.

I used some of Bob’s material to quickly create my own little etude to practice over Giant Steps. I used the same licks in the first four bars and the second four, transposed appropriately, and an eight-bar sequence over the last half. Here’s what I came up with (if you catch any bad notes here, they are mine and not Bob’s):

It’s a bit repetitive (though, let’s be honest, so is Coltrane’s solo). However, these are chord changes that I haven’t played much, and as of this morning couldn’t have played fluently even at this tempo. But in just a few minutes, I was able to put together an effective quasi-etude and get it under my fingers. Now I have a little bit of vocabulary at my disposal for this tune or any others that have borrowed Coltrane’s harmony. With the sheer quantity of material available in this book, I could play for many choruses without ever repeating myself. And in the stages of preparing to do so, the internalized vocabulary would have already started to recombine into new and creative variations.

Bob is open about this book being a “scratch pad,” not a highly-polished method book. There’s great vocabulary material here, but it comes some-assembly-required (for example, the licks are in no particular order). This isn’t a bad thing in the end, since it means spending some time spent in experimentation and discovery.

I do think there are a few notational niceties that could help to move this book out of “scratch pad” status, if Bob should choose to do so for future releases:

Despite those few very minor complaints, I think this is an excellent resource and a good, efficient way to wade into Giant Steps and Coltrane harmony. Kudos to Bob for his great work!

At the time of this writing, the Giant Steps Scratch Pad Complete is available by instant PDF download for $21.95. Single-key editions are still available as well (for C, B-flat, E-flat, and bass clef instruments—sorry, jazz English hornists) for $9.50 each in PDF or $10.95 plus shipping in print.