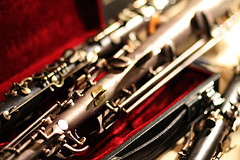 A reader emailed me to ask this question (edited):

I was wondering if you could give me some information on what kind of opportunities being a doubler has opened up for you. I am beginning to consider options for graduate school and am looking into multiple woodwinds degrees. Thanks!

I do consider myself to be at the beginning of a hopefully long career, but doubling has already given me some opportunities that I surely wouldn’t have had otherwise.

Doubling isn’t a career that typically leads to fame outside the music business, but within the industry many of the best and best-known doublers are working in Broadway pit orchestras, in the Los Angeles recording studios, or on the road with touring jazz or pop acts.

I haven’t had any of those jobs, nor do I anticipate pursuing any of them at this point. But here are a few things doubling has done for me:

Doubling gigs. These are gigs where I am actually hired to perform on multiple instruments. Most reasonably large cities in the US seem to have at least a few community or school musical theater productions with large enough budgets to pay a professional or semi-pro orchestra, and woodwind doublers are generally in demand (bonus points for double reed players or “low reeds” players). Doubling gigs can also include being hired as a local to play behind a touring show or artist who is passing through town, or being a sort of utility woodwind player for local orchestras, churches, and so forth. Often for me these have been sort of write-your-own-job-description situations, where I’m hired to play one instrument, and later re-hired because I’m able and willing to cover some other parts, too.

Non-doubling gigs. The best way to get gigs is by building a network of musicians who know and trust you. Doing doubling gigs has gotten me access to lots of different musical circles: classical, jazz, rock and pop, folk, and more. I always pass out business cards on a gig, listing the things that I can do. If a local rock band decides they need an oboist on their new track, they probably don’t know the principal oboist of the local symphony, but they do know me.

Private teaching. If you are looking to build a private studio, or to get a job teaching at a music store or private music school, versatility multiplies the number of potential students. To do this well, you will have to really know your stuff on each instrument (how well do you know the beginning method books? good solo competition pieces for high school students? etc.). I’ve had a number of jobs teaching at summer music camps and such. The camps often book me first, and then let me know which instrument I’m teaching once they have made some more phone calls and determined who else is available.

Academia. My main gig now is as a university music professor, at a smallish school where I was hired to handle all of the reed studios (oboe, clarinet, bassoon, saxophone). In many similar cases, a single-instrument player is hired, who does their best to teach the other instruments (sometimes very successfully, I should add). But my background on multiple instruments was a major advantage in getting noticed by the search committee. Some of my single-instrument-playing friends from graduate school, who were at least my equals in education and musicianship, weren’t fortunate enough to get hired right out of school. I believe that my doubling ability made me more attractive to potential employers.

General personal and musical enrichment. Not to get too warm and fuzzy, but some of the very real benefits of doubling haven’t been monetary in nature. As an undergraduate saxophone major, I rarely got to play Bach, Beethoven, or Mozart. And the bassoon majors rarely got to play jazz or rock. If you play both, the possibilities start to open up.

If you’re interested in multiple woodwinds degrees, be sure to check out my list of degree programs and my previous blog posts.