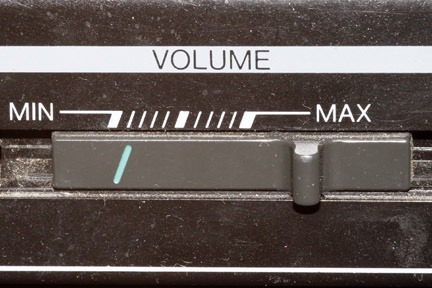 Woodwind players often struggle with decrescendos that quit too soon. (“Decrescendi” if you prefer.) It’s pretty disappointing to play a graceful phrase and have the last note end abruptly instead of fading down smoothly to zero.

There’s not a special technique to deploy in order to make successful decrescendos to niente. This delicate dynamic effect just exposes a common shortfall in the fundamentals of tone production. Correcting this makes good decrescendos possible.

Softer dynamics are produced on the woodwinds by shrinking the aperture (opening) in the embouchure. The flute has an independent aperture, which can be made smaller or larger at will. The aperture on reed instruments is built around the opening of the double reed, or the opening between the single reed and the mouthpiece. Reducing the aperture of the lips on reed instruments applies a slight pressure that squishes the reed closed a little, reducing its opening. (This is a lip movement, not a jaw movement).

As the opening is reduced, airflow into the instrument decreases. At a certain point there is no longer enough power to keep the reed or flute air jet vibrating, so it stops. Hopefully, this occurs at such a soft volume that it seems like the note faded away completely.

When the note ends too abruptly, check to make sure breath support isn’t decreasing with the decrescendo. Steady, powerful breath support as the aperture decreases equals an increase in air pressure. This keeps the reed vibrating as the opening and the volume decrease toward zero.

Consistent, strong breath support and a flexible, well-formed embouchure are the keys to successful decrescendos.