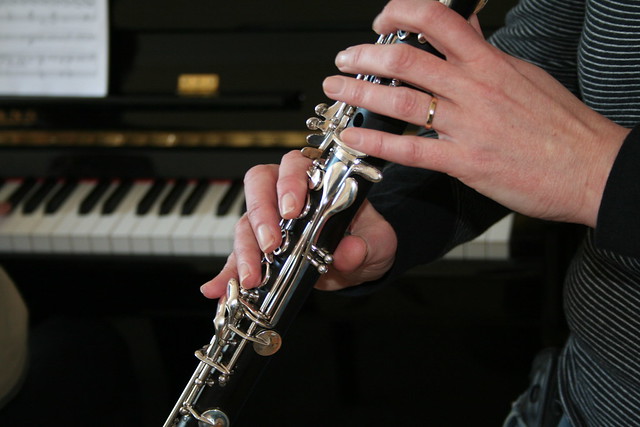 The question of whether the clarinet should use vibrato has been argued to death, and I won’t pursue the question further here. Suffice it to say that it’s a matter of taste and a matter of tradition.

American and European classical clarinetists usually don’t use it. Why that particular quirk of taste and/or tradition has taken hold probably can’t be pinned down for certain. But there are some weak theories that are worth retiring for good:

I don’t see any reason to believe that the clarinet is uniquely unsuited to vibrato, or that there’s anything inherently “right” about the clarinet being vibrato-free.

Among proponents of clarinet vibrato, there is disagreement about which body part(s) produce the effect—the lips? the diaphragm? the cheeks? This is essentially a settled matter among clarinetists’ closest cousins, saxophonists, who nearly universally produce vibrato with jaw movement. I find this to be the only really viable option on the clarinet, as well, since it can be manipulated mostly independently of tone, response, intonation, and dynamics (by maintaining stable embouchure and breath support).

As to why vibrato hasn’t become standard in the clarinet world, my best theory is that the clarinet’s unique high voicing is relatively easily disrupted by jaw vibrato. While it’s very possible to do clarinet jaw vibrato well, it does take some care to do it without destabilizing the voicing and causing pitch and tone instability. I suspect that over the centuries clarinetists have found this to be a mild deterrent, and instead have leaned into clear, vibrato-less tone as a virtue.

In any case, some classical clarinetists have used it with great success, but the prevailing tradition is a pure and un-embellished tone, without even a trace of vibrato.