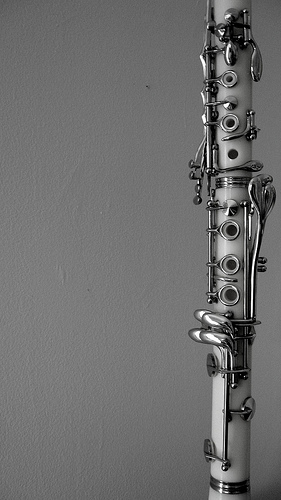 The question, then, is this: for a given piece of music, did the composer simply choose a specific clarinet in an attempt to make life easier for the clarinetist? If so, it may no longer be necessary to use two clarinets to do the job of one, with the modern instrument’s more sophisticated keywork giving it more chromatic freedom. The clarinetist might pick his or her preferred instrument for the situation, regardless of which is specified by the composer. (Jack Brymer is willing to leave the decision up to an even lower-level employee: “There is a fairly strong school of thought which suggests it [the use of both A and B-flat clarinets] is an archaic hang-over and that the composer should simply write the score out in concert pitch and leave it to the copyist to sort the matter out.”)

The other possibility is that composers selected either B-flat or A clarinets to exploit a difference, real or perceived, in tone quality. Colin Lawson points out that composers as orchestrationally astute as Francis Poulenc and Richard Strauss have scored for B-flat and A clarinets to be used simultaneously, with the clear intention of contrasting the instruments’ timbres. Brymer, however, contends that “one can prove scientifically that the sounds of the B flat and A clarinets are identical,” and attributes any perceived timbral difference to preconceived notions.

The clarinetist who chooses to use only one clarinet to play parts written for either instrument must, of course, become skilled at transposing. Another issue is the very slight difference in range: the A clarinet’s low E (concert D-flat) is unobtainable on the ordinary B-flat clarinet. Some musicians have used a B-flat clarinet built to reach the extra low note, but Lawson quotes the conductor Sir Henry Wood as calling this practice a “great mistake.” Sniffs Sir Henry, “I always missed the particular quality of the A instrument.”

The debate over the B-flat and A clarinets is built essentially on differences of opinion. The only clear conclusion that can be drawn at this point is that clarinetists for generations to come will walk onto the stage with a clarinet in each hand.

3 thoughts on “B-flat and A clarinets: redundant?”