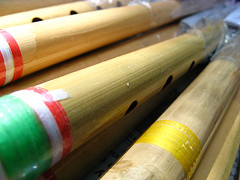 Most woodwind instruments come in several sizes, and a naming system is required for describing the size and pitch of each. The most familiar for players of modern Western woodwinds is that used for (for example) the clarinet and saxophone families, with most of those instruments being described as “in B-flat” or “in E-flat.” However, there are several other systems in use in the larger woodwind family tree. This can be confounding for newcomers to folk, ethnic, and period woodwinds, but I’ll attempt to shed some light on things.

Here are the four primary systems. The names are my own:

Okay, let’s try an example. Suppose that you have a simple-system flute (with an embouchure hole and six finger holes that produce a major scale). When all six holes are closed, the sounding pitch is D. Here is how that instrument would be described in each system:

Here’s another example: a simple-system flute with a three-hole note of B-flat.

I hope this information will come in handy for woodwind players who are new to folk, ethnic, and period instruments when reading notated parts (remember, alto recorder uses different fingerings than soprano) or purchasing instruments (remember, a dizi in D isn’t the same size as an Irish flute in D).