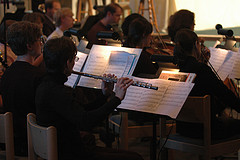 I got an interesting email recently. I’ve edited it heavily and fictionalized almost all the details, since I’m using it here without permission, but you’ll get the idea:

I found your web page through a Google search. My company is presenting a themed cruise for classical music lovers departing from Seattle in February, featuring performances by a full symphony orchestra.

I am looking to hire a woodwind doubler to serve as a sort of human insurance policy, should something happen to one of our woodwind players while we are out to sea. I’m wondering if you know anyone in the area who would be interested. We will rehearse in Seattle before departure. Compensation is room and board on the ship and travel to the Hawaiian islands, plus $50 per service to attend all rehearsals, and $100 per concert if called upon to perform. I need someone who can play flute, oboe, clarinet, and bassoon, and the repertoire is standard symphonic fare: Mozart, Schubert, Brahms, etc.

Let me know if there’s anyone you could recommend for this. There’s a nearby university with a degree program in multiple woodwinds, so I figure there must be a number of students or graduates who are available. I would like to hire someone in the area, since unfortunately we can’t pay for travel to Seattle.

I’ll confess to being sort of fascinated by the idea of being hired as a kind of utility backup for an orchestral woodwind section. And I did put out a call for some potential hires, but didn’t get any nibbles. It’s a creative idea, but there are a number of practical obstacles:

I would be curious to hear from anyone who has done a gig like this, on land or sea.

9 thoughts on “The woodwind doubler as orchestral utility player”