From the woodwind blogs in August:

I got to attend this year’s International Clarinet Association conference (“ClarinetFest”) on the Louisiana State University campus in Baton Rouge.

The conference started on a sad note, as a car accident claimed the lives of two clarinetists on their way to represent Baylor University, and injured two others. In their memory, many of the conference attendees wore ribbons in Baylor green during the week. Many of the conference events began with a moment of silence. 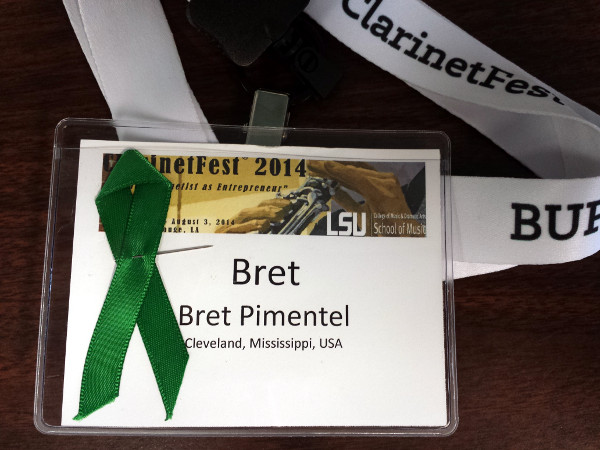 The conference was, as always, packed with events, sometimes with three or four venues active at the same time, starting Wednesday afternoon and continuing through Sunday afternoon. The first few days were unseasonably cool and pleasant, but the Louisiana heat and humidity came back in time for the weekend.

I went to more recitals than I can remember or do justice to here, with outstanding and varied performances by clarinetists from around the world. Many of the recitals were listed as “lagniappe” programs, featuring several soloists or groups each playing a work or two. (For more details, try the ClarinetFest blog, which has many reports on individual events.)

I also attended a number of lectures and workshops, opting mostly for those related to movement and health (an area I would like to improve in my teaching), but also a few based on the 2014 theme of “The Clarinetist as Entrepreneur.” Another particular highlight was a panel discussion featuring Stanley and Naomi Drucker, Lawrence Sobol, and Larry Combs telling stories from their careers. And I gave a presentation on woodwind doubling in the 21st century (more details in another blog post).

The exhibit halls were filled with the sounds of clarinetists trying out new instruments and accessories. I picked up a few items, at least one of which I hope to review here soon.

I participated in a clarinet choir made up of around 50 clarinet professors, which was a nice chance to meet some colleagues.

Each of the evening concerts was a highlight. Wednesday’s program was clarinet works with a chamber orchestra, Thursday featured jazz clarinetists, Friday was chamber music featuring the clarinet, and Saturday was concerti with a full orchestra.

As expected, ClarinetFest 2014 was an excellent and inspiring experience, but also exhausting. It would be okay with me if in the future some of the evening concerts got trimmed a little for length—3+ hours is a lot of clarinet when it follows a full day of recitals and masterclasses, and the next day starts bright and early.

ClarinetFest 2015 will be held next July in Madrid, Spain.

I recently renewed a few memberships in some of the woodwind-related professional organizations. I like to stay current with as many of these as I can, because I enjoy receiving their publications and attending their conferences whenever possible. Most offer some other benefits like score and book lending libraries, eligibility for a group instrument insurance plan, member directories, and exclusive website content.

Membership is especially useful for woodwind folks in academia—students and professors alike—who are hoping to build their vitae. There are opportunities to publish articles, interviews, reviews, and such in the organizations’ publications, and to perform, present lectures and demonstrations, and participate in competitions and masterclasses at the conferences. Students can usually join the organizations and attend the conferences at significant discounts.

The groups I’m listing below are the major ones that North American woodwind players ought to seriously consider joining. There are others, mainly regional groups, of which I list as many as I’m aware elsewhere on this site (see flute, oboe, clarinet, bassoon, and saxophone organizations).