Each week I have my university woodwind students submit a report on the number of hours they have practiced, and I award them points based on that number. (They are additionally graded on how well their lesson goes.)

I don’t think points-for-practicing is an ideal situation, and perhaps not necessary at some more competitive, more performance-oriented schools. The students at my small, regional university have a range of backgrounds and ability levels, but certainly for some the idea of an intensive practicing routine is new and challenging. This approach helps keep them incentivized (bribed? threatened?) to practice several hours per day, until hopefully it becomes a self-motivating habit. Or, in some cases, it helps them realize that their commitment level isn’t compatible with the degree program.

That gives them essentially unlimited extra credit if they want to go above and beyond, or lets them practice a little extra during slower weeks so they can free up some time for weeks that are busier with midterms or band trips.

Practice reports are due every single Monday of the semester, even holidays. This works better than having them report hours between lessons, since sometimes things get moved around in my schedule and it ends up being more or fewer than seven days between lessons. I have streamlined the reporting process quite a bit by using the university’s LMS to automatically administer a weekly “quiz,” which looks like this: 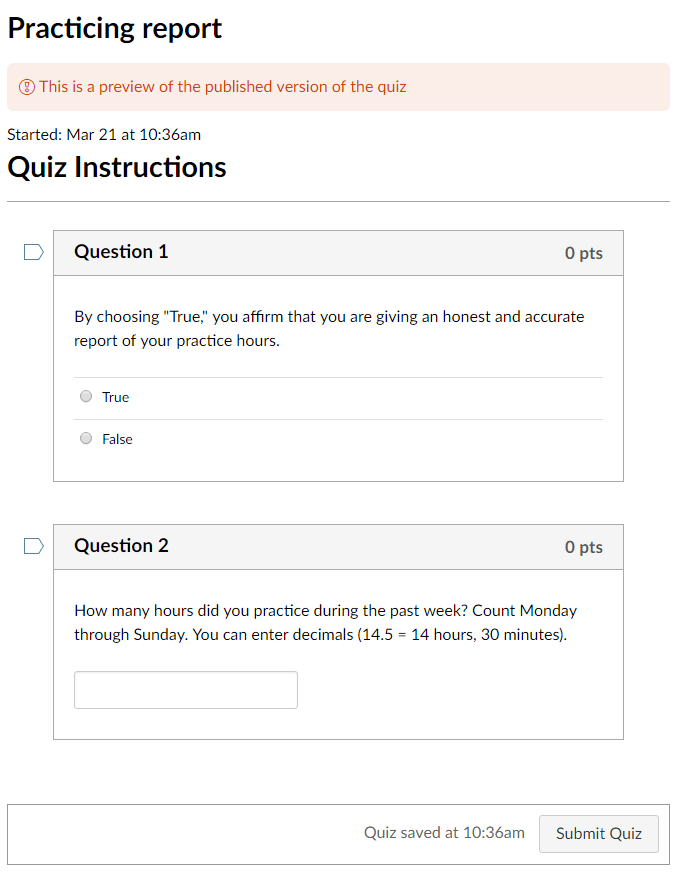 For Thanksgiving break in November and spring break in March (each a full week with no classes) I have been collecting practice reports, and treating them as pure extra credit. That way I’m not punishing students who spend those vacation days with family or who need a break from the instrument. But the students who are serious about playing usually put in a pretty solid effort during those weeks and earn a nice grade bonus for it.

When I explain this system to other educators I often get asked about honesty. I haven’t found it to be a major issue. That might be partly because of my students’ background and upbringing (it’s the Bible Belt), and maybe partly because lying turns out to be pretty unsustainable: if their reported practice hours don’t seem to match their level of achievement, I start asking tough questions.

When I was a first-year undergraduate music major and not yet fully convinced of the importance of practicing several hours per day, a nudge/threat from the music department scared me into changing my ways. But the sudden “motivation” to apply myself a little better soon started paying off. As I had more and more success I felt more and more inclined to practice because I got more and more out of it. Ultimately, I learned to enjoy and even crave the hours in the practice rooms. It’s exciting to see my students making that same transition.